To say that CNN staffers are upset and more than a little pissed off about the network’s decision to hire a partisan political operative to oversee its 2020 campaign reporting might be the biggest understatement of the year.

But then, the year is young so, there are lots more opportunities for Jeff Zucker to step in it. 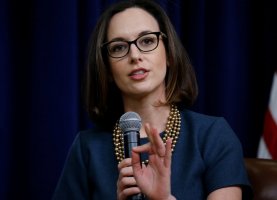 But for now, the hiring of Republican political advisor Sarah Isgur Flores as the cable network’s politics editor charged with overseeing CNN’s political coverage next year.

Flores has no background in journalism – indeed Isgur’s main experience has come as an advisor to Ted Cruz and Mitt Romney, and served as Carly Fiorina’s deputy campaign manager for the 2016 Republican primary.

Everybody is supposed to feel reassured that she will not play a role in covering the Department of Justice.

But she will be popping up as still another talking head.

According to Politico, Flores’ relationship with CNN has given rise to “a whisper campaign among Trump supporters in and out of the government who are arguing — with no evidence — that she was the source of damaging leaks against the administration.”

Her hiring to fill a journalistic role, given her lack of journalistic credentials would seem to give great credence to those whispers.