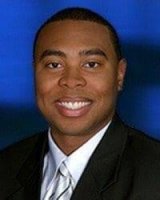 Next Monday, he’ll show up as the new co-host on “Good Morning Illinois,” on Comet’s WHOI, joining Jessica Cook and meteorologist Joe Puma.

The bosses are thrilled.
“We are thrilled to have Donnie re-join our team”, Heart of Illinois news director Lon Lucas said. “Donnie has been covering news in Peoria/Bloomington/Normal for years.”

Up until February, Tillman did sports 75 miles away at WICS, the Sinclair station in Springfield, IL, even though his family continued to live in Peoria.

He had worked in the Peoria market at WHOI and, later, WMBD, for eight years before moving to the Springfield station.

We can speak from experience – that kind of commute , which Tillman endured for five years, is murder.