Sometimes when you work for an organization you see people on the so-called “fast track”, and that certainly has been the case with CBS anchor Norah O’Donnell who it seems was just not long ago a CBS Correspondent, then anchor and now being moved into a bigger role at “60 Minutes.” 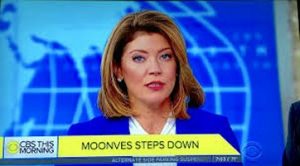 Page Six reports amid a massive shake-up at CBS News, it has exclusively learned that “CBS This Morning” anchor Norah O’Donnell has been given an “expanded role” at the network’s flagship “60 Minutes.”

O’Donnell — who has been tipped to replace the struggling anchor Jeff Glor of “CBS Evening News” — is already a contributor to the venerable CBS news magazine. But we’re told that — amid Gayle King’s big-money contract negotiations with CBS — O’Donnell has been assigned her own team of “60 Minutes” producers to work on her projects.

Stories for the show can often take six months or more, and the move means O’Donnell will have a dedicated team. It’s hoped that the plan will free her up to generate more hard-hitting, well-researched stories for the 51-year-old show.

A rep for O’Donnell didn’t get back to Page Six, and a CBS rep declined to comment.