She has now found a fit with Sinclair Broadcast Group, which is hiring her for a three-month stint as a special correspondent focusing on the U.S.-Mexico border. 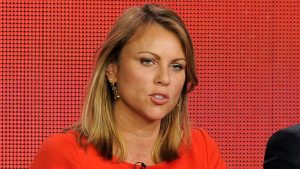 “There’s no interference whatsoever,” Logan tells The Hollywood Reporter. “The mandate is to just go down there and come back with great stories. That’s it. … I never expected that at this point in my career, after all these years, I would have that kind of freedom.”

Logan, who lives in Texas but has never covered the border dispute before, has become a star in conservative circles since appearing on a Feb. 15 podcast and criticizing the mainstream media as left-leaning.

She’s appeared regularly on Fox News opinion shows in recent weeks, leading to speculation that she could join the network.

“We’ve had conversations on and off for probably more than a year,” said Scott Livingston, Sinclair’s vice president of news. “We’re thrilled to have her on our team. I think she’s a great fit. She’s smart, dynamic, resilient and tough as nails. She’s an incredible journalist. … To be able to add an elite reporter to our team is an incredible opportunity for us.”.