A broad coalition of broadcast television station groups as well as public broadcasters announced at the NAB Show on Monday that ATSC 3.0 (aka Next Gen TV) will be rolled out in 40 U.S. markets by the end of 2020. 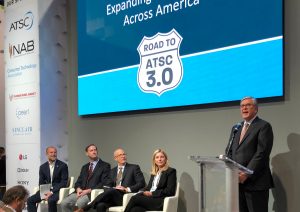 Subject to final engineering and required approvals, consents and FCC license modifications, the participating broadcasters have identified the first stations that will convert to ATSC 3.0 service in this rollout. Primary broadcast programming currently broadcast on the stations planning to upgrade will be hosted by other stations in their respective markets.

Top 40 Markets where the first transitioning stations have been identified (ranked by population) include:

Work is now underway to identify Next-Gen TV stations in these Top 40 markets (ranked by population), with details to follow in the coming months:

Additional TV markets where stations have been identified for Next-Gen TV service (ranked by population) include:

“America’s broadcasters are on the cusp of a revolution in television,” said Gordon Smith, NAB president. “The many companies invested in TV broadcasting are committed to better television service for both our viewers and for our advertisers.

There was also good news for consumers as Michael Bergman, vice president of technology and standards for the Consumer Technology Association noted that ATSC 3.0-enabled sets and devices are expected to hit the market by 2020.

FCC Commissioner Brendan Carr advocated for broadcasters to use ATSC 3.0 to innovate and better compete with telecommunications companies.

“It’s important that the FCC authorized broadcasters to start experimenting with ATSC 3.0, giving you the freedom to innovate—a freedom that your competitors and many others in the tech sector already enjoyed,” he said. “And when I think about the ways that broadcasters can use that freedom to innovate, one use case stands out to me: ATSC 3.0 as a new and competitive broadband pipe.”