Ah, Spring across the SW/SE can only mean one thing: Severe Weather.

Forecasters in Dallas-Fort Worth started warning this past weekend of potential “hail the size of baseballs”, prompting events and flights to be canceled.  News meetings were held, promos went into rotation and station managers ordered countless boxes of pizza to feed the hungry, who were either kept late or rescheduled to cover the approaching apocalypse Wednesday evening.

Apparently people are already parked under overpasses in Fort Worth, which @FortWorthFire does NOT recommend! #WFAAWeather https://t.co/efWyt6G1i9

After days of mentioning the possible baseball sized hail, WFAA’s (ABC) weather chief posted this on twitter, wondering why locals were freaking out.

Why are people cancelling classes this afternoon and sending people home from work early this afternoon!?!?
You realize this is an EVENING event!!!

Here is a picture from Mak Rockholt of the landspout east of Amarillo. Thank YOU to everyone who has been sending pictures and videos to our newsroom today! #phwx @NewsChannel10 pic.twitter.com/h43DzA4xiY

and as storms were forecast to move through Texas into Louisiana, Nexstar jumped all in Wednesday, offering a digital only weather report from meteorologist across the Nexstar nation. 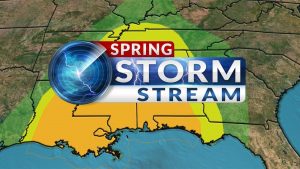 While the DFW stations staff feasted on pizza and waited, after three days of hype and promo’s the dreaded hail never came.

Most of the stations got plenty of comments, like this one on WFAA’s website, oddly though, the nasty-grams were disappearing as soon as they were posted.

I’m so tired of the hype. They have cried wolf so much that when bad weather does come no one will believe it. …

Let’s stay safe out there as these storms sweep through the South Thursday.