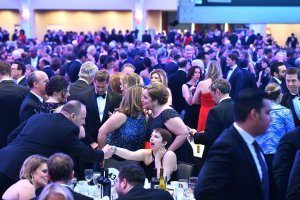 The event you love to hate, the annual self-satisfied pat on the back known as the White House Correspondents’ Association dinner is back this coming Saturday – but the glory days, thankfully, appear to be over.

This year, the White House has ordered administration officials to boycott the WHCA dinner.

Mr. Trump shares our disdain for the annual event, but we have entirely different reasons.

For Mr. Trump, the event is unsatisfying because it has never held him in much regard, even though the WHCA was happy to take his table fee (we THINK he actually paid to go, but we don’t have access to the books.)

Only events that devolve into fealty to Mr. Trump earn his praise and continued patronage.

For us, the WHCA has long been an entirely overblown affair by a gaggle of Beltway narcissists who demonstrate their show business aspirations with red carpet photo ops and competitions to see who can attract the most well-known and high profile A-listers in Hollywood.

Wait, that’s something else….

The WHCA evidently has learned a lesson from the Michelle Wolf debacle last year.

In November, the correspondents association announced it would forgo a comedian as emcee this year.

Historian Ron Chernow will be the featured speaker Saturday night, in an attempt to lend some gravitas to the proceedings..

Wait. Didn’t he write “Hamilton” which was turned into a monster Broadway musical?

The Washington Post’s Margaret Sullivan offered some particularly pungent observations on the annual exercise in self-absorption.

For years, the White House Correspondents’ Association annual dinner was an embarrassment.…

It involved journalists cozying up to the government officials they are supposed to treat with a sense of adversarial independence, all while trying to get selfies with the likes of Helen Mirren, Jeff Goldblum and Scarlett Johansson.

“The main purpose of the evening,” John Oliver quipped, “seems to be providing photos of glamorous celebrities completely unaware of who they’re standing next to.”

President Trump has changed all that. By refusing to attend the dinner himself and by making the government-press relationship truly adversarial — “enemy of the people,” etc. — he’s sandblasted the high gloss off the party.

And the point we’ve been making for years:

“If you’re a reporter, you shouldn’t be taking selfies with the defense secretary,” Patrick Gavin, formerly of Politico, once told The Wrap.

Gavin produced the 2015 documentary “Nerd Prom: Inside Washington’s Wildest Week,” a sendup and exposé of the annual dinner’s old ways.

Trump is certainly no friend of the free press, but in his role as dinner-damper, he’s done journalists a huge favor.