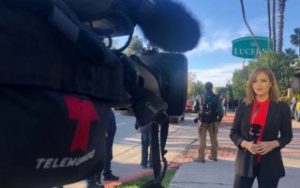 Freelancer Karla Amezola is now reportedly a full-time staffer based out of Miami for Telemundo’s network news operation.

Media Moves reports that multiple sources have confirmed she is already on the job, although official word has yet to come.

She has been freelancing for Telemundo for the past five months.

Back in 2017 we told you  that Amezola was terminated from her previous job as anchor of EstrellaTV, and sued her boss, former VP of News Andrés Angulo, and the network in 2016, after reporting a history of sexual harassment.

The lawsuit is still making its way  through the courts.