Now there is something you don’t see all that often said about the sewer of social media. 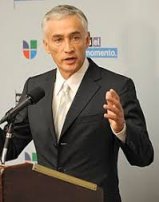 But Univision anchor Jorge Ramos offered up his heartfelt testimonial while discussing his network’s deepening collaboration with Twitter.

Recently, when Ramos went to Venezuela to interview President Nicolás Maduro, the Venezuelan president abruptly terminated the interview, ordered the cameras and other equipment confiscated and Ramos detained.

“Before they took us, we contacted our boss in Miami,” Ramos said. “Our boss started a Twitter storm. Everybody in the world knew that we had been detained. Let me tell you something. It worked.”

As he was being hustled off to jail, Ramos told his keepers to check their social media.

(Here is where we get this odd mental image of uniformed goons simultaneously pulling out their smartphones and checking them while their prisoners cool their heels. Back to story)

The tweetstorm worked…Ramos and crew were freed.

But even a broken clock is right twice a day.