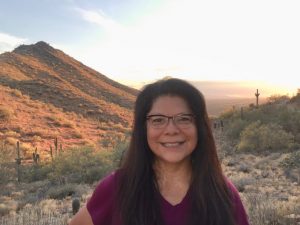 Talahongva is a multimedia journalist who has rich experience in television, radio, and newspaper journalism. She is a member of the Hopi Tribe.

“I can’t think of anyone more qualified for this position than Patty Talahongva,” said Mark Trahant, editor of Indian Country Today. “It’s as if she has been preparing for years for this exact job and for this moment in history.”

Indian Country Today will soon open a newsroom on the campus of Arizona State University.

The goal of the nonprofit news enterprise is to expand its news gathering operation and to produce the first national news show by and about Native Americans. Indian Country Today is also planning a short daily video report as well as other broadcast projects. Talahongva will be based in Phoenix, beginning in early June.

Talahongva has been on the front row as a reporter or producer for so many national stories She covered the Rodney King riots in Los Angeles in 1992, reporting from the streets, in 2004 she reported live from the National Mall in Washington, D.C. for the grand opening of the Smithsonian’s National Museum of the American Indian, and more recently she was on the ground producing stories about the Yarnell Fire, in Arizona, which took the lives of 19 Hot Shot firefighters.