The shrinkage continues at CBS-owned WBBM in Chicago.

Not only is there downsizing of personnel. 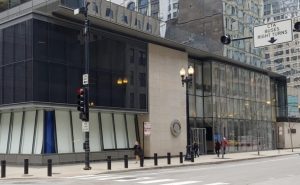 Now the station is looking to rent out its former street-front studio in the Loop.

Once touted as the crown jewel of the building (along with WBBM’s long-dismantled Jumbotron), it’s become a white elephant for the company.

With windows looking on to Daley Plaza, the 3,500 square-foot space at the northeast corner of Dearborn and Washington was used for newscasts from 2008 to 2017.

But as Robert Feder reports, it’s been gathering dust since the station unveiled a new set in Studio B.

So now the old two-story studio is being marketed as suitable for “restaurant/retail users,” according to commercial real estate advisor SVN Chicago.

More News from Wednesday, May 29, 2019View As Newsletter