Thou shalt not criticize thy corporation’s stupid edicts. 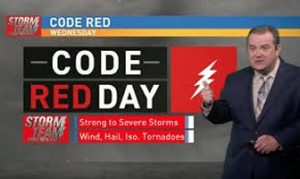 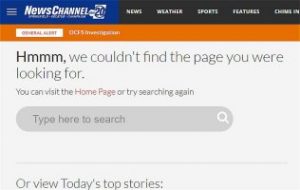 And the result is that Crain is suddenly MIA from the airwaves of the Springfield, IL. tv station and his bio  has been scrubbed from the website.

Already the online petitions are up and soliciting signatures to restore Craig.

On Wednesday, Crain criticized the station’s “Code Red” weather warning system, saying it is a “corporate initiative” that “doesn’t recognize that not all storms are equal” and has generated widespread complaints.

“So we want you to know it’s not us,” Crain said during a morning broadcast on a day that actually would see severe weather later. “This is a corporate initiative, the Code Red alert. And behind the scenes, many of us have tried to dissuade it for the last few months, to try something else that’s less controversial to the viewers.”

Now so far, the station management and the corporate suits are remaining tight-lipped.

But corporate is defending its “Code Red” policy:
“The outbreak of severe weather events across the country in recent weeks makes clear that Code Red alerts serve a critical function in keeping viewers informed of potential danger and threats to their safety. The decision to issue these alerts is made by our local meteorologists and we will continue to trust our local experts to know when to make the call to announce these warnings.”

It’s a fiction that corporate issues policies that the folks at the local level are free to implement or ignore.

At Sinclair, in particular, you only have to look at the stations that tried to ignore or bury the famously inept commentaries by the marble-mouthed “chief political analyst” Boris Epshteyn only to be overruled by the suits.

Will Crain, the most tenured meteorologist in the market return?

Or is his 15 year run over because he called “bullshit”?