CNN’s Jim Acosta, one of President Donald Trump’s least favorite journalists, has a book about covering the administration.

“The Enemy of the People” comes out Today from HarperCollins. 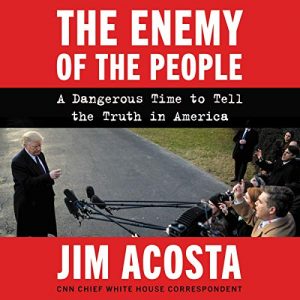 Trump has called Acosta an “enemy of the people” and told him, “You’re fake news.”

Acosta is promoted the book this past weekend on “CBS Sunday Morning” and CNN’s “Reliable Sources.”

On its website, CBS News has an excerpt in which Acosta recalls covering Trump’s reactions to the deadly white supremacist rally in Charlottesville, Va., in 2017.

Acosta writes: “Like a poker player, Trump has a tell, giving away what kind of hand he’s holding. If he’s screaming about ‘fake news,’ he’s almost always losing.

And he was losing on Charlottesville.”

Acosta says, “I wanted to send a message to folks who really care about what we do, and the message is basically this: I did not want my children to grow up in a country where the press is called ‘the enemy of the people,'” Acosta said.
He pointed out that past administrations, led by Republicans and Democrats alike, did not “demonize” the press to the extent that Trump has.
With Trump, “I think it started off as an act — based on my reporting — the president threw out ‘fake news’ and ‘the enemy of the people’ at the beginning just to sort of taunt and troll us. And that has essentially gotten out of control,” Acosta said.
Now “some of his supporters feel it’s OK to lash out at us in ways that I think put us in danger.
The book is available in area bookstores and online.