The second night of the second round of Democratic debates took place Wednesday in Detroit. Of the night’s many match-ups, none was more anticipated than presidential hopefuls Joe Biden and Kamala Harris. 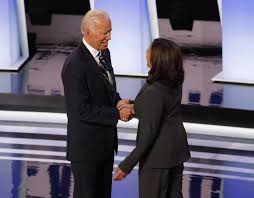 The candidates initially took the spotlight during the first Democratic debate thanks to fiery exchanges, including Harris challenging the former Vice President about his comments about working with segregationist senators and his record on civil rights.

Before things got under way, social media picked up on a now controversial line uttered by Biden to Harris as they greeted each other on stage: “Go easy on me, kid.”

As the night unfolded, easy would not describe the two’s exchanges as they went toe to toe on several issues including health care and race.

You can read all the details blow by blow here.