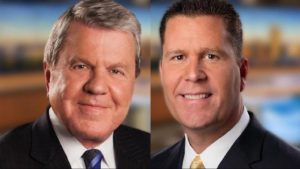 But now he’s staying at least through 2021, to extend his 25-year tenure with the station.

It’s a gift.
“Having the opportunity to serve another year is a gift,” Crabtree said. “This continues to be one of the greatest jobs in one of the greatest businesses … that of journalism. I’m learning something new every day … often taught to me by our loyal viewers which makes me most fortunate.

On the other hand, sports reporter/anchor Jeff Gravley is leaving at the end of his contract in December to….say it with us….pursue other opportunities.

“We’d really like him to stay, but he’s going to pursue other opportunities, hoping to land in an environment where sports is the primary focus,” according to news director Rick Gall.

The better part of Gravley’s 35-year career has been spent at the Raleigh station.