ABC News has announced the moderators for the third Democratic debate, as well as the qualification rules. 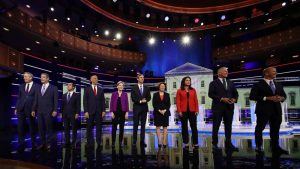 ABC News is partnering with Univision for the debate which will air live on both networks from Texas Southern University’s Health & PE Arena in Houston, Texas.

In order to qualify for the showdown, candidates must receive 2% or more support in at least four national polls, or polls conducted in the early-voting states of Iowa, New Hampshire, South Carolina and Nevada. They must also have received donations from at least 130,000 unique donors over the course of the election cycle, with a minimum of 400 unique donors per state in at least 20 states by August 28 in order to qualify.