Don’t know if you saw this one late last week, but a reporter was a bit too close to a fire during a live shot. 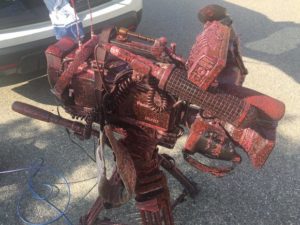 KNSD‘s Steven Luke was reporting from Riverside County on the efforts to control the Tenaja Fire.

He was in the middle of his newscast report when suddenly, right before he tossed back to the anchors in the studio, a Cal Fire aircraft appeared from the other side of a hill and opened its cargo doors.

Instead of dropping his camera and running, Photographer Scott Baird held the shot and – well, you can see for yourself – captured the retardant drop in all of its glory.

“It’s kinda of like pink raindrops. It doesn’t really stick to you or your clothing,” he said afterwards. “You can wipe it off with a wet cloth.”