The station featured a nice goodbye pkg on him. 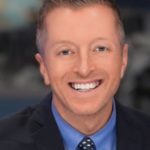 Hines took to Facebook himself to say farewell to those who followed him and coworkers.

He wrote in part:

This week…bittersweet…as I wrap up my 15 year career at KFOR-TV.

Still have an infinite thirst for truth and connection…BUT I’m listening to my heart & following the twinkly lights.

The emotions come and go.. feels like a death (because it is)…as I bid farewell to “In Your Corner” and my K4 immediate & extended family.

I’ve been taking a long hard look in the mirror in 2019..reflecting on identities…attachments…and the roles I’ve assumed over my 39 years on this earth plane.

i’m feeling really grateful.. for ALL OF IT…
but NOW is the time to consciously & deliberately shift into a new space, new energy..

a BIG lesson in trusting my life path…

accepting what is.. and having faith that all is well.. and that the path of least resistance will reveal itself to me no matter what happens.

No immediate word what led to his departure but we wish him well in the future.