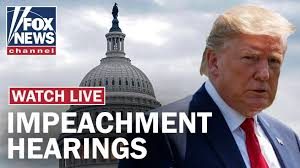 And in fact, the pioneer of 24/7 cable news, CNN, found itself in sixth place, behind the two cable silos for the left and right, and the three broadcast networks, who still play the news game fairly straight down the middle.

It wasn’t all that long ago that, despite Fox News’ dominance during those prime-time opinion hours, CNN would recover its mojo when news was breaking and in the developing stage.

And how do you explain polling which strongly indicates that a majority of the American people believe something fishy was happening in the Ukraine situation vs. the ratings that put Fox News on top of the ratings heap?

Isn’t this the network whose prime time hosts consistently deride the impeachment hearings as “boring” and “partisan” political theater and urge viewers to tune out even their own networks’ coverage of it?

Several of them even suggest the public is tuning out the hearings.

“Here’s the big takeaway: another huge dud. Americans are tuning out in a big way.” (Hannity)

“Tylenol PM has nothing on Schiff.” (Ingraham)

Most idiotically, Greg Gutfeld: “The media is shoving this down your throat, with blanket, abysmal coverage, and then they scold you for not genuflecting before their altar of solemn news. This is historical, they tell you. No, it is hysterical.”

Other phrases Fox News hosts have used to sum up the hearings: “mind-numbingly dull,” and “a frickin’ joke.”

The good news is that Fox News coverage of the hearings is largely anchored by Chris Wallace.

Wallace has specifically contradicted the contention that people don’t care by pointing to ratings and saying Tuesday, “a lot of people are engaged and are watching this.”

And Fox really wants you to know that the hearings are being covered by the news division of the cable giant, not the prime time vaudeville division.

So why is Fox News winning the ratings battle even though their most influential voices would prefer their acolytes at home to tune out?

Wallace is a solid anchor, and that is likely recognized, hopefully across the ideological spectrum.

Wallace would be preferred to the perpetual outrage machine one endures on MSNBC and CNN.

At the end of the day, 62 million people voted to make Donald Trump president, so they’ve got some skin in the game in these hearings.

And if they’re watching Fox News coverage, they’re not hearing what they might want to hear.

They have to wait for primetime for that.