Well at least the president of NBC News didn’t say “No comment.”

That would have been the ultimate irony. 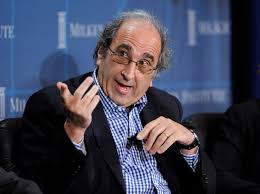 But if Andy Lack truly doesn’t know much, if anything, about the cloud hanging over his news division in the wake of the Ronan Farrow book  “Catch and Kill: Lies, Spies, and a Conspiracy to Protect Predators,” then how in the hell is he still president of his beleaguered division?

The quote above came from an encounter between Lack and “The Washington Post’s” Erik Wemple prior to Wednesday night’s Democratic presidential debate in Atlanta.

In the weeks since Farrow’s book burst on the scene, the calls have been increasing for an outside investigation into the many charges leveled against NBC News executives and personalities in his book.

“The question is open to whether they put dollars ahead of decency,” said Megyn Kelly, a former NBC News and Fox News host during an appearance last month on Fox News. “Were they more interested in protecting their star anchor (ED.-Matt Lauer) than they were in protecting the women of the company? There needs to be an outside investigation into this company. They investigated themselves; that doesn’t work.”

Since then, four Democratic presidential candidates — Sens. Cory Booker (D-N.J.), Kamala D. Harris (D-Calif.), Bernie Sanders (I-Vt.) and Elizabeth Warren (D-Mass.) — have signed a letter spearheaded by activist group UltraViolet advocating for an outside investigation. “We, the undersigned candidates, are very concerned about the message it would send to sexual assault survivors if our next debate is sponsored by MSNBC without clear commitments from Comcast . . . to conduct an independent investigation into the toxic culture that enabled abusers and silenced survivors,” reads the letter.

Yes, NBC did conduct something of an internal investigation for which it engaged two outside law firms.

But Farrow’s book claims that NBC higher-ups, including Lack himself, made certain to cover themselves as it became clearer that reports of Lauer’s misconduct had been reported for years – and ignored by the guys in the executive suite.

Given all that activity, surely Lack would want to express his confidence in NBC News’s efforts to date, to repudiate Farrow’s reporting and/or to let off some righteous steam? Not so fast. “I don’t have anything to say about it. . . . I don’t know much about it,” said Lack. “Good to see you.” When we asked a bit more about the situation, he said, “I don’t really have anything to say about it. I’m here, got a great debate going, so I’ll let you go.”

At that, NBC News communications director Richard Hudock interposed himself to end the conversation..