If it happens in DFW, Unclebarkey.com is all over it and Ed Bark is reporting KXAS (NBC) *may* be looking at a new locally produced show. 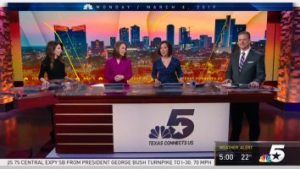 Bark has learned that NBC5 is taking a page from WFAA’s (ABC) long-running Good Morning Texas and gearing up for a new locally produced infotainment show tentatively scheduled to launch in March of 2020. Feelers have been sent out to potential advertisers.

KXAS tells Bark “there is nothing to report regarding a morning show for NBC5.”

The NBC Universal-owned station is obligated to carry NBC’s Today from 7 to 11 a.m. weekdays.

But the 11 a.m. to noon hour is open to alterations, with NBC5 currently airing a conventional local newscast in that slot.

Good Morning Texas, which airs from 9 to 10 a.m., has been raking in revenues via pay-for-play mini-infomercials that run at 5 minutes a pop several times per program.