Ted Sarandos is about to add another trophy to his cabinet. 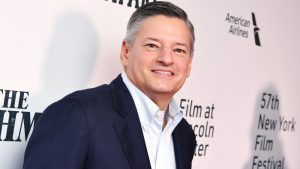 Netflix’s chief content officer has been tapped to receive the Golden Slate Award by the California Film Commission and Film Liaisons in California Statewide (FLICS), the organization of local film offices across the state, for his commitment to filming in California.

First instituted in 2016, the Golden Slate Award recognizes industry professionals who are determined to take advantage of California’s crews, locations and infrastructure, exercising their influence to film in-state as often as possible. Ryan Murphy was the recipient of the first-ever Golden Slate Award in 2016.

Netflix’s Sarandos — who has been responsible for all content operation since 2000 — leads the streaming giant’s commitment to California, where it shoots a number of projects. Among its slate of TV shows that shoot in the state are Grace and Frankie, The Kominsky Method, The Politician, The Ranch, One Day at a Time and Fuller House. Netflix movies that have called the Golden State home include Bright, Bird Box, Rim of the World, Sandy Wexler, Always Be My Maybe and To the Bone.

The prize was previously handed out at the Film in California conference held in the spring, but for the first time the honor will be presented at the California On Location Awards (COLAs) on Dec. 15 at The Hilton in Los Angeles.