A Fox News spokesperson on Monday denied former FBI Director James Comey’s claim that he was booked to appear on Tuesday’s broadcast of Fox & Friends, only for the president’s favorite morning show to cancel the booking following the Justice Department’s top watchdog finding there was no political bias in the Russia probe.

“FYI: I offered to go on Fox & Friends to answer all questions,” Comey tweeted on Monday afternoon. “I can’t change their viewers on Donald Trump but hoped to give them some actual facts about the FBI. They booked me for tomorrow at 8 am. They just cancelled. Must have read the report.” The ex-top cop also made the claim while appearing on an MSNBC daytime broadcast.

In response, a Fox News spox said: “James Comey was not booked and was never confirmed to appear on Fox & Friends.”

Someone claiming to be a Fox Booker denied that claim. 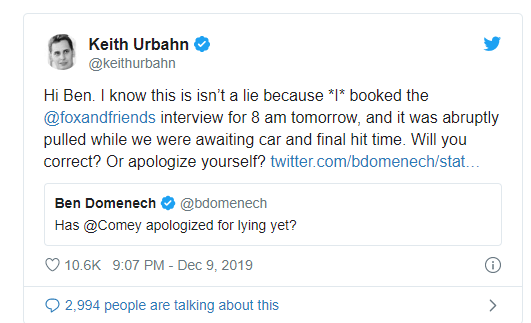