It’s a new year right? How bout we dredge up something kinda funny from the last decade.

In case you missed it all those years ago, after reporting on the Alaska Cannabis Club on a broadcast in 2014, KTVA (CBS) reporter  Charlo Greene tells viewers that she is the business’s owner – and says she will devote all her energy to fighting for ‘freedom and fairness’. She then drops the F-bomb and says ‘I quit’ before walking off-camera. 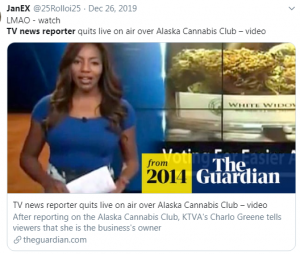 Things that make you go hmm. Let’s hope the roaring 20’s are a bit more tame.