Alex Trebek is getting candid about another side effect in his ongoing battle with cancer: depression. 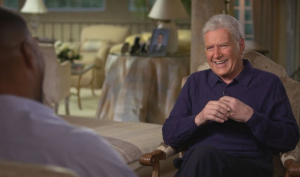 The L-A Times reports the “Jeopardy!” host and his wife, Jean, sat down for an interview with “Good Morning America” host Michael Strahan that will air this evening. Trebek opened up about his cancer diagnosis and how it has affected his mental health.

“My oncologist told me one of the symptoms, if you will, of pancreatic cancer is that you get these moments of depression, sadness,” Trebek, 79, said in a preview post released Monday.

The longtime quiz-show host first announced his Stage 4 pancreatic cancer in a YouTube video in March, vowing to “beat the low survival rate statistics for this disease.”

He has since talked openly about his treatment journey and the trials and limitations of the illness, even expressing some regret over having gone public with his diagnosis.