Could robots be helping write the news for KUSA (NBC) in Denver? 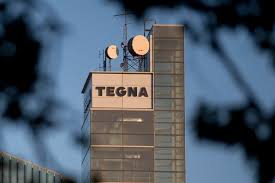 According to a Denver area newspaper that could be the case.

The TEGNA-owned TV station is using the services of a company called Hoodline that creates “thousands of automated local stories across the U.S. each month.” Here’s how Harvard’s NiemanLab described it:

Hoodline’s major offering is an automated news wire service focused on the local stories that can be found by mining large data sets, whether from city governments or from private companies like Yelp and Zumper. It handles the raw data and data analysis side of things: collecting available public data sets, forming partnerships with private companies to use their data, and narrowing trends and other local news topics that might be worth pursuing as stories down to the neighborhood level. Then it generates articles from this cleaned-up data using automation software (with help from Automated Insights, also used by the Associated Press), which are then available to news organizations interested in data-backed stories helpfully localized for the communities they cover.

Links included in this article may earn Hoodline and its partners, including this website, a commission on clicks and transactions.

So how does the coverage actually look? Here are some recent headlines: “The cheapest apartments for rent in Denver’s Highland neighborhood,” “Your guide to the 4 most popular spots in Denver’s Ruby Hill neighborhood,” and “Where to celebrate National Cupcake Day in Denver on Sunday.” 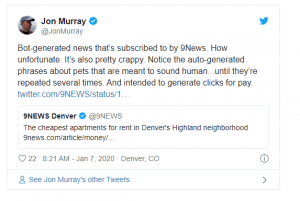 That’s a Denver Post reporter who later noted his paper’s own arrangement with automated content. “If it’s written, humans should write it,” he wrote.

So are bots actually writing this stuff? Demetrios ​Karoutsos, a spokesperson for TEGNA, which owns 9News, says the company is always exploring “new ways to create and deliver interesting and useful content to our online audience,” and that it has a partnership with Hoodline to publish a “small amount of content” to a few of its stations’ websites. “While there is some automation involved,” Karoutsos says, “the final product is reviewed by our stations before publishing.”