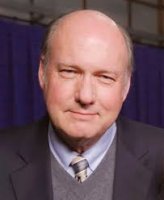 Page Six is reporting that legendary producer Bill Geddie is out as EP of Tamron Hall’s relatively-new talk show.

And could Bill O’Reilly be to blame?

Geddie, who we can either credit or blame (your call) for the monster success of “The View,” was a big part of the hype surrounding the launch of Hall’s program.

But evidently his relationship with the host hit a wall shortly after the program launched last September.

“He hasn’t been there since the holiday break and they stopped speaking around the fall,” according to one insider

Added another, “He has not been involved in the day-to-day running since October.”

“He had this idea for her to have Bill O’Reilly on the show because he thought he would be good for ratings and Tamron would only do it if she could press him about his sexual harassment allegations,” said the insider. “And they were definitely not in agreement on that. She refused, and the two never recovered after that.”

So we’re hearing that the guy who helped launch the all-woman “View” wanted to put a serial harasser on Hall’s show, but any questioning of his background was off-limits