The Shorewood, IL Police Department arrested a 20-year-old man on charges of battery and disorderly conduct following an incident during a live broadcast of WGN-TV’s 10 p.m. news.

Police said that during a live broadcast, Eric Farina grabbed a 37-year-old reporter from Chicago around her shoulders and uttered a profane and disturbing statement. Police said Farina left the area immediately, but detectives located him the next day at his hime.

“Farina made a full confession and was placed under arrest,” Shorewood police said.

WGN’s Jackie Bange took to Facebook and asked Shorewood residents if they could identify the young man. “He just assaulted our reporter during her 10 p.m. live shot,” Bange informed her followers. “He’s an absolute idiot and should be charged with assault!”

One commenter opined, “After watching the clip I genuinely don’t think he intended to assault her but at the end of the day, he put his hands on someone without their consent. I definitely believe it was meant to be harmless but it shouldn’t be have happened at all. I hope she’s okay and I hope he’s able to learn something from all of this.” 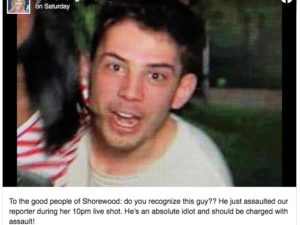 More News from Wednesday, May 27, 2020View As Newsletter