Skip to content
Just add him to the list.   Another journalist arrested by police while covering the protests in the aftermath of George Floyd‘s death.  Miami’s 7News social media producer Joel Franco was arrested by Miami-Dade police.
According to WSVN, all charges have since been dropped but Franco was still sporting a wristband from jail after “spending the night” for violating the city’s curfew.

“We wrapped up our coverage. We did a live stream before I went back to my car, and I was walking to my car. I noticed a line of police trucks and pickup trucks roaming the streets looking for people who are breaking curfew orders,” Franco said. “I started to film them as I was walking to my car, and that’s when they noticed I was filming. They just swarmed me, got out of the pickup truck, threw me against their pickup truck, raised my arms behind my back and put a little zip tie on me.”

Franco told officers he was there working for 7News. “As I was there, with my arms behind my back, I told them I was with the press. I had my work I.D. with the phone case, and they grabbed it, and that’s when they started acting clueless. They passed it to each other, whispering under their breath like, ‘He’s with the press.’ Some of them were like, ‘We don’t know what to do with him.’” 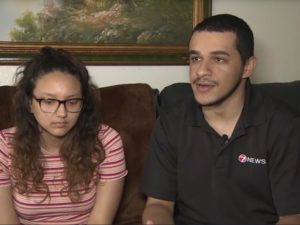 Franco’s girlfriend, Emily Reyes, was with him during the arrest. The police let her go.

“It’s shocking because if they were really implementing the rules for the curfew, then it wouldn’t have been him to go to jail, because I’m just a regular person,” she said. “I don’t have any credentials. I don’t have anything. I don’t work for any news people, and I was the one to be let go.”

Miami-Dade County Mayor Carlos Gimenez addressed the arrest and said, “That was a mistake. He should not have been, if someone from the media is exempt from the curfew, so we’re looking into that, and that was a mistake.”

Franco still spent nine hours in police custody before bonding out on the curfew violation charge.

“I thought it would be quick, like, ‘Hey this is a small charge or you’re with the press.’ I thought at some point, they were going to say, ‘All right, we made a mistake.’ But no,” he said. “When I put on the orange jumpsuit I was even more terrified. I was like, ‘All right, I might be here for a while.’ My first time in jail.”

Franco said he is anxious to return to work and get back to covering the peaceful protests.