Acting Department of Homeland Security (DHS) Secretary Chad Wolf seems to have just admitted their agents have been making unconstitutional arrests of Black Lives Matter protesters in Portland during a series of public appearances.

Here’s the exact comment Wolf made on Fox News.

“Anytime that you attack a federal facility such as a courthouse in Portland that is a federal crime,” Wolf told Martha MacCallum on Tuesday night. “Attacking federal police officers–law enforcement officers–which they have done for 52 nights in a row is a federal crime. So, the Department, because we don’t have that local support, that local law enforcement support, we are having to go out and proactively arrest individuals and we need to do that because we need to hold them accountable.”

Anticipatory arrests, of course, are prohibited under the U.S. Constitution.

“I don’t know if shining a laser at someone is a federal crime,” he wrote. “It doesn’t matter. The police do not have probable cause to arrest you just because you are standing near someone else who may have committed a crime.” 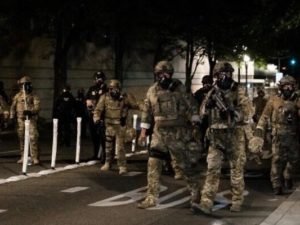