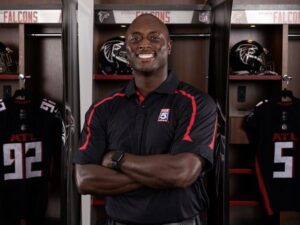 WAGA says Shockley will do the newscasts weekday afternoons and evenings as well as special sports programming.

“D.J. is well-known to millions of sports fans across Georgia and the Southeast, both for his accomplishments on the football field with the Georgia Bulldogs and the Atlanta Falcons, as well as his career as a broadcaster. We’re thrilled to welcome him as a member of the FOX 5 team,” Stucky said.

He was drafted to the Falcons in 2006. He spent more than four years in the NFL. During his time in the league, he got a taste of TV and became an analyst for the SEC network, Raycom and the Big Ten Network. Prior to that, he quarterbacked at the University of Georgia.

“The opportunity to work at FOX 5 is so humbling and the chance to work with so many talented people is pretty cool,” said Shockley. “I am grateful, honored and blessed to be in this role at a place like FOX 5 where I look to carry on the standard set by Ken Rodriguez.”