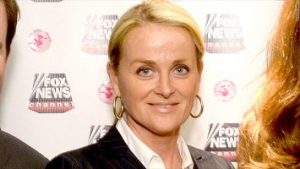 As far as that “boys’ club” thing under the Roger Ailes regime, Suzanne Scott is not without baggage.

Unmentioned in the glowing press release about her promotion to CEO, however, was the fact that Scott was named in multiple ex-network stars’ lawsuits as having played a key role in upholding ex-CEO Ailes’ culture of sexual harassment and gender discrimination.

Scott was reportedly among the group of executives who worked mightily behind the scenes to rally support for Ailes in the weeks after former host Gretchen Carlson dropped a bombshell sexual-harassment lawsuit in July 2016.

Yes, Scott is said to have been one of the more enthusiastic organizers of “Team Roger.”

She was promoted to president of programming this time last year, despite internal and external protests.

One former staffer described Scott as “a nightmare—just as bad as the rest,” NPR media reporter David Folkenflik wrote last year.
“‘Worse than Shine’ in deflecting concerns of women,” he said a current Fox staffer told him.