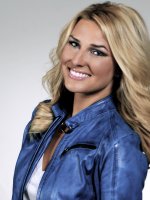 Fox O&O WFLD in Chicago evidently made a popular move with Shae Peppler.

After it was announced she has moved up to full-time sports reporter and weekend sports anchor at the station, there was a reaction you don’t normally see.

According to Chicago’s Robert Feder, Fox 32 news anchor Corey McPherrin tweeted: “The newsroom exploded with applause when the news was announced.”