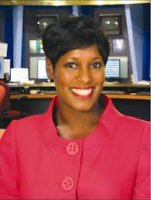 Semone Doughton returns to TV news after a nearly two-year hiatus from the business.

She’s been hired by Quincy Media’s WEEK in Peoria, IL to co-anchor the station’s morning shows.

Doughton left Raycom’s WTVM/WXTX in Columbus, GA back in 2016 after spending nearly 15 years with the station.

She earlier took a hiatus from the business to move to her hometown to be the Public Relations Liaison for Houston’s first African American Mayor Lee P. Brown before returning to tv in Columbus.

And now, it’s on to Peoria.