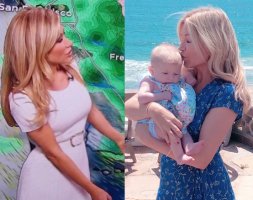 Six months after she gave birth to her first child, a daughter named Bridgette, KCBS/KCAL weather anchor Jackie Johnson announced she’s not coming back to the job, and will stay at home as a fulltime mom.

Johnson had spent 14 years with the CBS-owned stations and had been a fixture to Los Angeles audiences..
“It’s bittersweet time for me,” Johnson said. “I’ve been blessed to have had this amazing career with KCBS and KCAL. But right now, my priority is to stay at home and raise our baby girl. I have a new respect for mothering, as it is the hardest but most rewarding job. And I’m loving it!”

“It has been a pleasure to have Jackie as a member of our team for nearly 14 years.  She is a talented broadcaster and an even finer person.  We respect Jackie’s decision to make Bridgette her top priority,” Steve Mauldin, president and general manager of CBS 2 and KCAL 9.