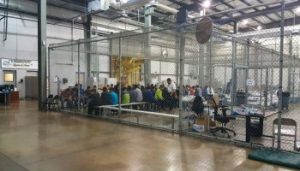 Since the beginning of the “zero tolerance” immigration policy that is separating would-be immigrants from their children, the Trump Administration has been arguing – concurrently, mind you – that its family-separation policy:

It’s not helping to draw attention away from the Administration’s policies that spawned a weekend of protests, administration push-back, an highly critical op-ed by a former first lady and a wildly-misinterpreted statement from the current first lady.

Both NBC and CBS featured reports from the detention center that was once a Wal-Mart, giving us some of our first impressions of the facilities.

Over the weekend images of some detainees, including children, in cages brought a new angle for reporters to cover.

She didn’t pull any punches.

“All I can say after talking to people, watching the people, listening to the people, that the Statue of Liberty, I think, is weeping right now,” King told viewers. “It’s unbelievable, the stories we’ve heard.”

King also relayed word that the border patrol was taking exception to the use of the word “cages,” even while acknowledging that detainees were, indeed, being kept in cages.

King is on the scene again this morning.

Fox News continues to play the role of Kevin Bacon in the finale of “Animal House,” screaming “All is well” even as the vast majority of reporters, left, right and center, trample over it to illustrate that the detention centers are antithetical to the public’s perception of national compassion.