Just a year after he took over hosting duties of “Midday Maryland”, another of those execrable “pay to play” program, this one on Scripps’ WMAR in 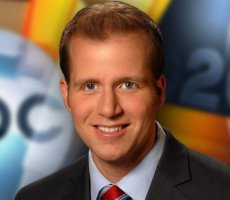 Baltimore, MD Wyatt Everhart is turning his back on television.

Everhart, who at one time was chief meteorologist for the station is now a solar analyst with an outfit called Solar Energy World.

In his new role, he’ll help homeowners and businesses adopt solar energy for their homes and offices.

Before he joined WMAR 10 years ago, he was at WJBK in Detroit.

“By making a move out of television weather and going into solar now, I get to use my meteorological background to help homeowners and small businesses save significant money on power, and at the same time help clean up the environment by improving the quality of the air we all breathe. It’s truly a win-win.” Everhart said.

And it likely feels more productive than hosting supermarket-sponsored cooking segments and participating in exercise workouts.