WNEP, the Tribune station in Wilkes-Barre/Scranton PA, prides itself on its weekly “Talkback Feedback” segment, where the station responds to viewer calls left on its “Talkback 16” line throughout the week.

As if viewers wanted to discuss anything weighty.

The latest overwhelming concern of callers seems to be the station’s new music and sound effects. 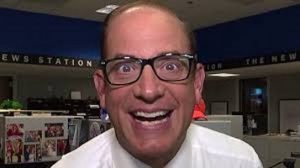 So anchor Scott Schaffer the segment by emphasizing all the “critical” topics WNEP viewers had to discuss.

The idea of “critical” topics quickly melts down into three viewer calls — one complaining about the “little thing you do in between commercials and the program” — which would be the station’s “Move Closer to Your World” inspired music package.

Just to make certain the folks at the station knew what he was talking about, the caller re-enacted the package — albeit one composed entirely of “da da da da da.”

The next caller complained about the bell “sound” the station uses when it displays the seven day forecast — complaining that the sound effect should be replaced with a more church bell-like effect — “ding ding” vs. “bong.”

And Schaffer responded accordingly, using the proper amount of gravitas.