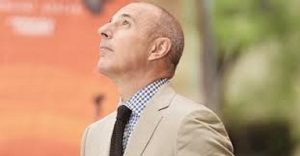 Matt Lauer is singing “Poor, Poor Pitiful Me” as he begins to rise back into radar range.

In a new interview, Lauer contends he’s an easy mark and being taken advantage in the wake of his dismissal from “The Today Show” over charges of sexual misconduct.

Lauer claims that the group he’s up against in a New Zealand property battle are “taking advantage” of the controversy that’s surrounded him since his ousting.

Lauer, 60, purchased the lease to a $9 million ranch in New Zealand last year.

Government groups in the island nation are attempting to get Lauer to allow full access to hikers to travel through his property to get to the Hawea Conservation Park, but Lauer is seeking compensation from local officials for him to grant more access.

Because he can’t possibly live on the leftovers from the $25 million per annum NBC was paying him for the last several years.

You may have bought the property, but you’re still a guest in the country. Try to be a good one.

If this is how it’s going to go Matt, go back under the radar until you can man up.