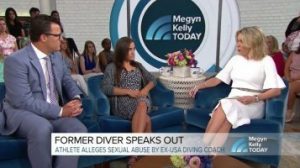 Sharp-eyed viewers who have mornings free to dial around the network morning talk offerings should be forgiven if they have a sense of déjà vu when taking in the just-revamped backdrop of NBC’s  “Megyn Kelly Today.”

The creative minds on the program have been fooling with the look from the beginning – because, you know, that will solve the ratings issues the show faces.

And the most recent iteration of the program’s video walls kind of brings to mind….ummmm…..”The View.”

The show’s logo is now parked inside a deep blue circle with white and lighter blue ring segments rotating around it.

“The View,” which switched to an version of its current circular logo with its 2014 makeover now uses a bright blue circle with its name in the center.

And they did quite a bit of their own tinkering over at ABC to come up with that.

There is nothing new under the sun.

Or in the ring.