Well here’s one way to get around visually-challenging phone interviews. 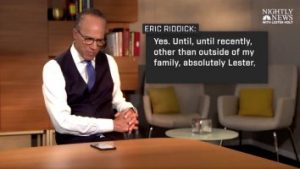 It’s not perfect, but when NBC’s Lester Holt recently did a phone interview with Eric Riddick, who’s been jailed for 26 years for a murder he says he did not commit, it was conducted via smartphone.

Holt sat in a room with the smartphone set to “speaker”  on the table in front of him and addressed Riddick while a variety of camera shots were taken.

Wider shots were used when Riddick’s responses were captioned on the screen.