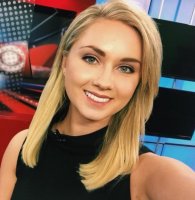 Awhile back, Elizabeth Pace was hired as an MMJ at Nexstar’s KLBK in Lubbock, TX and soon found herself promoted to  weekend evening anchor/reporter at the station in March of last year.

Now she’s made a big move to become a news reporter at Cox-operated and owned WJAX/WFOX in Jacksonville, FL .

She’s an Indiana grad, and we won’t flatly deny we ran this item because the above headline just wouldn’t let us alone.