Which is rather refreshing. 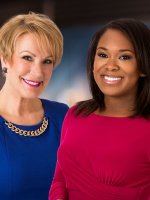 The new hour, which will air at 11 AM, will be anchored by Melinda Davenport with longtime meteorologist Sally Severson.

Davenport has been with the station for four years while Severson has been on board since 1986.

Both have been pulling early-morning duty and this will bookend their days.