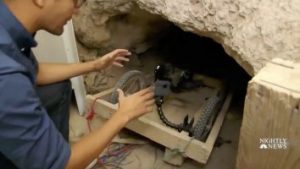 NBC News took advantage of some infrastructure left behind by resident at that New Mexico compound that was raided by authorities last week to give viewers an inside glimpse of the place.

Gadi Schwartz, the host of the network’s “Stay Tuned” Snapchat program has been turning up quite a bit on the main network and it was he who was dispatched to New Mexico.

The news team worked with the property owner to put small, unmanned GoPro cameras on a motorized platform on tracks running through the tunnels.

The tracks were built by the people living on the property and remained in the tunnel complex after the raid.

The result gave an unsettling look at the conditions in the network of underground tunnels where the children were kept.