While everybody, rightly, went out of their way to pay tribute to the Queen of Soul on her passing Thursday, leave it to Fox News to provide an inadvertent laugh for the sharp-eyed in the audience. 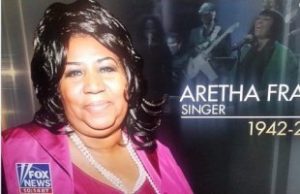 Yes, that’s Aretha Franklin in the main part of the graphic, but look closely at the background on the right.

Patti Labelle is very much alive.

And not only that, but the image they used is from her performance at the White House. With President Barack Obama.

When your production staff is overshot with low-paid 20-something interns, stuff like this happens.

Fox has apologized for the bonehead error, but in doing so, compounded the error by claiming that “production errors” caused Franklin’s image to be cropped out of a picture of her and LaBelle performing together at the White House concert.

They never sang together at the concert.