Sacramento news viewers were less than pleased when Tegna’s KXTV gave the unceremonious boot to anchors Cristina Mendonsa and Dale Schornack in the middle of the May 2017 sweeps after 21 years (Mendonsa) and 19 years (Schornack). 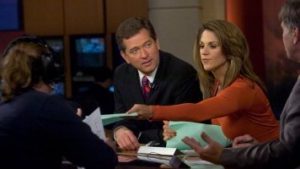 Mendonsa, after more than a year, is landing behind the microphone beginning Monday as she starts co-hosting the “KFBK Morning News.”

Mendonsa will work with co-host Dan Mitchinson on the morning news show from 5 a.m. to 9 a.m.

The radio station is thrilled.
“We’re thrilled to have Cristina join iHeartMedia Sacramento as co-anchor/host of The KFBK Morning News,” Curtiss Johnson, senior vice president of programming, said in a news release.