One of the original faces of ESPN’s much-hyped, seldom-watched “Get Up” is signing off at the end of this week. 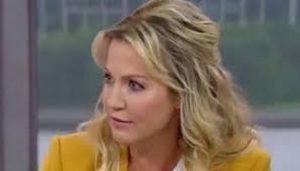 Michelle Beadle will move to Los Angeles to front “NBA Countdown,” and will also be a part of a new NBA post-game show “After the Buzzer” launching in the fall.

It will air after Wednesday and Friday doubleheaders on ESPN.

Beadle’s pending departure was announced on the same day that she went on the ratings-challenged “Get Up” and again took football to task for its cavalier attitude toward the abuse of women.

The slap on the wrist given to Ohio State coach Urban Meyer triggered her monologue:
“…there’s a reason why this will be the second season I don’t watch NFL and I don’t spend my Saturdays watching college football either. I believe that the sport of football has set itself up to be in a position where it shows itself in the bigger picture to not really care about women — they don’t really care about people of color, but we won’t get into that for NFL either. But as a woman, I feel like a person who has been marginalized. And every single one of these stories that comes out, every single time, pushes me further and further away. I realize that they don’t care, but for me, it’s opened up my weekends. I appreciate you for giving that to me. I don’t care anymore.

Meyer was given a three-game suspension by the university as the result of his ignoring the revelation that former assistant coach Zach Smith had assaulted his ex-wife on more than one occasion.

Smith remained on the coaching staff until recently.