So Friday is her last day after a rather turbulent year at the WorldWide Leader©. 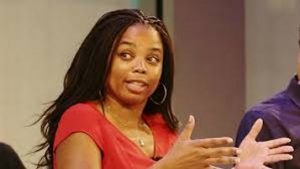 The Jemele Hill saga at ESPN ends after exploding nearly a year ago, on Sept. 11, 2017.

The White House called for Hill to be fired.

Earlier this year, she abruptly left her low-rated 6 pm edition of “Sportscenter,” and has been largely invisible since.

A buyout of her reported $2.5 million per year contract has been completed.

It was an inevitable ending.