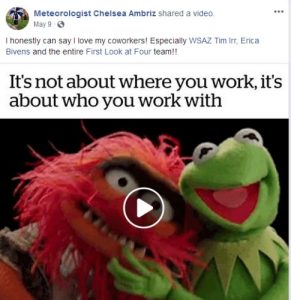 That’s what it says right here in the police report.

Ironically, it was at a benefit called “Girls Night Out,” whose purpose is to raise money and awareness of domestic abuse that Chelsea Ambriz and Erica Bivens got into a real throwdown over last weekend.

The duo are the meteorologist and anchor of the 4 PM newscast at Gray’s WSAZ in Hunting-Charleston, WV.

But the two looked anything like a harmonious news team.

Now, Bivens is recovering from a skull fracture and a ruptured eardrum and Ambriz…who honestly loves her coworkers it says here…is facing misdemeanor charges of battery.

The two got into it, allegedly because, after a few too many adult beverages were likely consumed, Ambriz started hitting on Bivens’ husband.

Push came to shove and Bivens ended up on the floor.

Ambriz was summoned to appear in Kanawha Magistrate Court on Sept. 21, according to court documents.

If Ambriz is found guilty she faces up to a year in jail and/or a fine of no more than $500.

She should hope it’s only a suspension.