On the same day the FBI arrested a Los Angeles man for threatening the lives of journalists at the Boston Globe ( calling them the “enemy of the people”), the fellow who evidently inspired him was on a tear once again about the media.

It’s been well over a year since Donald J.Trump sat down with NBC News anchor Lester Holt and proceeded to spill that he fired FBI Director James Comey with the Russia investigation in mind

Now, he is accusing Holt of “fudging” the recording of the interview.

What the fudge does that mean?

Trump’s admission has caused no end of problems in the 15 months since it aired and it has inspired the wing-nuttiest of websites and commentators to claim that somehow the recording was manipulated.

No specifics for the claim have ever been offered.

And guess who appears to have picked up on the tinfoil-hat conspiracy theory. 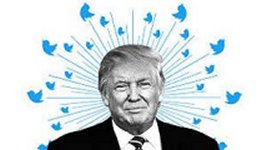 Thus, the tweets flew…
“The hatred and extreme bias of me by @CNN has clouded their thinking and made them unable to function. But actually, as I have always said, this has been going on for a long time. Little Jeff Z has done a terrible job, his ratings suck, & AT&T should fire him to save credibility!”

“What’s going on at @CNN is happening, to different degrees, at other networks – with @NBCNews being the worst. The good news is that Andy Lack(y) is about to be fired(?) for incompetence, and much worse. When Lester Holt got caught fudging my tape on Russia, they were hurt badly!”

“I just cannot state strongly enough how totally dishonest much of the Media is. Truth doesn’t matter to them, they only have their hatred & agenda. This includes fake books, which come out about me all the time, always anonymous sources, and are pure fiction. Enemy of the People!”

Has anyone ever mused on what room he is in the White House when he composes these early-morning rants?

He then took his act on the road, this time to Evansville, IN last night

“These are just dishonest, terrible people, I’m telling you that. Not all of them, honestly, not all of them. I’d say 85 percent,” Trump told the crowd.

At least he seems to be back in his comfort zone of attacking news organizations instead of search engines – where he seemed a bit out of his depth.